Gravy is one of my favorite types of sauces; I smother just about everything on my plate with the stuff when I can get away with it. Even my favorite breakfast is fresh buttermilk biscuits under a blanket of piping hot cream gravy. That’s why it’s so confusing that I so rarely cook my own gravy on Thanksgiving day. I guess it’s just because I already have so much on my to-do list that I figure I will save myself a little bit of time by picking up a tub of vegetarian gravy from the grocery store. You know what though? It almost always disappoints. The quality of the other food at the table tends to outshine the hint of bitterness I feel for not having made the gravy from scratch… but not this year! 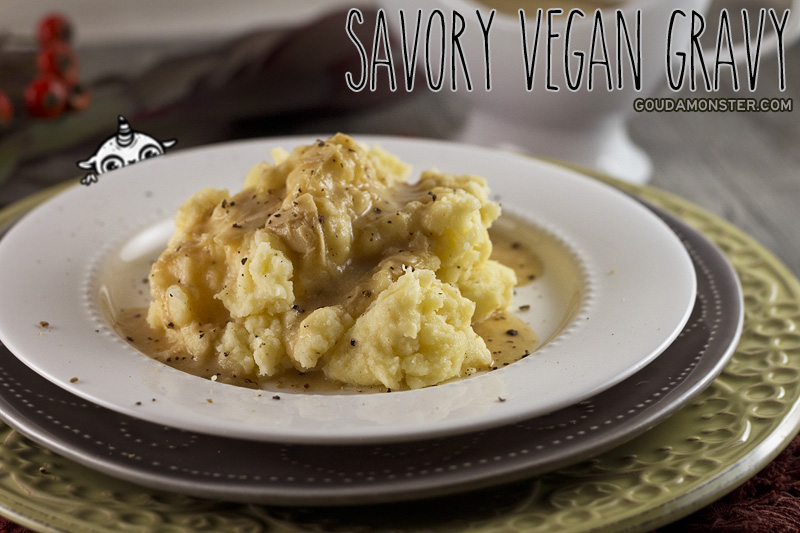 Whenever I was writing up this recipe I had some serious internal conflict as to whether or not I wanted to put “vegan” in the title. On one hand I’m excited to let vegans know that they can have gravy so good they’ll want to pour a bowl of it and eat it like soup. On the other hand… well, I want the non-vegans to know that they will want to do the same thing. The word vegan can be a little intimidating to some folks, especially when dealing with traditional meat centric recipes – but it shouldn’t be! This gravy is good. It’s damn good – and I think that anyone at your table (vegetarian or not) will absolutely love it.

First can I just tell you that this gravy is made with two heads of garlic? You heard right. Not two cloves… two heads of garlic. That alone should assure you that this recipe is not messing around when it comes to flavor. I know that plenty of people don’t want to put their pan drippings to waste, so if you aren’t a vegetarian you can certainly substitute them in place of the oil while making your roux. Vegetarians could also use butter instead of oil if that’s what they like. In either case I wouldn’t recommend removing the nutritional yeast from the recipe. It’s an unfamiliar ingredient to some, but don’t let the off-putting name deter you from giving it a try. It’s generally fortified with B12, is a good source of protein, is naturally fat and sodium free – but none of that stuff would really matter if it didn’t taste good, would it? Don’t worry – it does! Most people liken the flavor to that of a mild, nutty parmesan cheese. It has a lot of uses, but in this recipe it slightly thickens the sauce while enhancing its savory flavors. If you decide to go without, I would probably double the roux and allow your gravy to reduce for longer. I’ve never done this myself though, so if you try it be sure to let me know how it goes!