I’m pretty new to the cookie butter craze, having only just eaten my first bite maybe a month or so ago.  Woe is me for not jumping on this bandwagon sooner. Cookie butter makes the most intensely rich, flavorful frosting and it pairs beautifully with this moist brown butter banana cake.

I picked up my first jar of cookie butter with the thought that I would make whoopie pies with it. I’d never made whoopie pies before so I went in search of a recipe to help get me started. While they were baking I whipped up a fluffy cookie butter filling… and it was DELICIOUS. I read once that food bloggers shouldn’t throw the word delicious around, but in this case I don’t even care. It was DELICIOUS IN ALL CAPS. Unfortunately the whoopie pie recipe I followed didn’t wow me, so I tossed the cakes out and we took to eating the frosting on its own straight from the bowl with a spoon. We call that shameless around here.

I’ve tried both Biscoff Spread as well as Speculoos Spread from Trader Joes. Both are excellent but I think I slightly favor the smooth, creamy consistency of Biscoff Spread. The Speculoos is very dense but it’s also a little more flavorful and spicy, which I love. I’ve made this frosting with both and they each yield great results.

Oh man… it’s been a while since I’ve done this. As with many new obsessions, it’s easy to explode out of the gate only to lose the race down the road. My last post was before Christmas and originally I guess I made the excuse that the holidays got the better of me. For several weeks I was perfecting a gingersnap bark recipe that would be perfect for packing into Christmas tins. Obviously I didn’t get that done, but I’ll look on the bright side – I now have another 7 months until Christmas to get the recipe just right!

I still cook all of the time. I still plate and photograph my food. I import the recipes into myfitnesspal’s recipe builder to get nutritional information. You’d think with this much work out of the way that it would be pretty easy to write something up to share with the few people that check my little ol’ blog. Unfortunately it’s all of this stuff (imagine me gesturing at these words on my monitor) that doesn’t come so easily to me. A lot of bloggers have a way of effortlessly weaving stories into their recipe posts. They talk about remembering the smells of their grandmother’s kitchen as she baked dinner rolls. Maybe they recall their recent visit to the farmers market where they found beautiful fresh cut sunflowers and the first perfect strawberries of the season. You see, I don’t have these types of stories to share with readers. I’m just a gal that cooks and eats. Ever so often I cook (and eat) something that really stands out, in this case enough to make me… could it be? Write a blog post about it?? 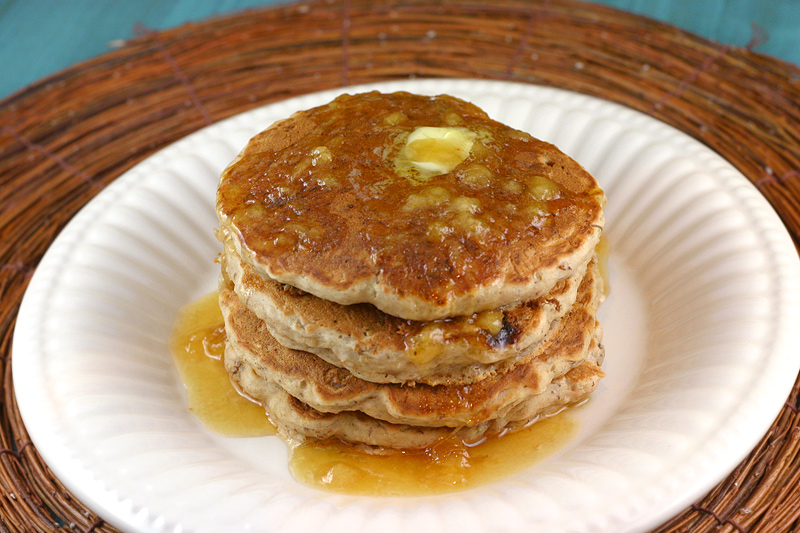 Inspiration struck me one morning when my sweet tooth demanded pancakes… more specifically the oatmeal “Cory cakes” available at the Dallas coffee shop Legal Grounds. They make them with oatmeal, which lends a slightly nutty flavor and subtle texture to the cakes. They are delicious. In addition to that craving I realized that oatmeal pancakes always seem to call for rolled oats, but I’m a steel cut oats kind of gal. Add in the overripe bananas I had sitting on my counter and you have all of the ingredients (HAHA INGREDIENTS! FOOD PUN!) for the sort of cooking experimentation that I love.

Well here it is folks – the pancakes that reawakened the dormant food blogger within me. My maple muse. When I first made these they were such a big hit that I made them again a few days later.  Then I made them yet again this morning, this time opting to try out my vegan substitutions just to ensure the quality didn’t suffer in the process. That first photo up there is of the vegan version by the way – I guarantee you nobody would know it either. The original version (shown in the other two photos) was made with a small amount of sour cream. If you find yourself with time to make a special weekend breakfast, I highly recommend giving these a try. They are some of the best pancakes I’ve ever made! 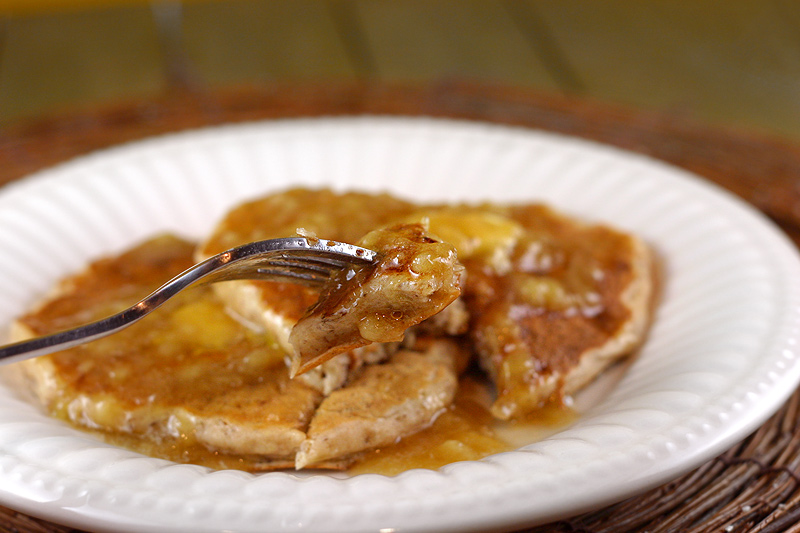 Summary: Liven up the maple syrup with fresh banana and a splash of rum. 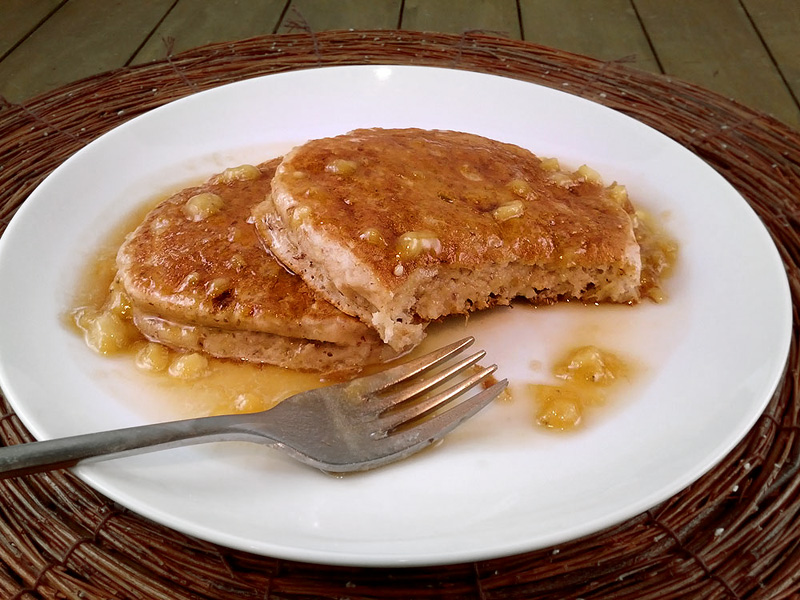 Today I’m going to tell you a little story about a mild baking failure that was reborn as a heavenly breakfast dish the following day. Like a diabetic phoenix rising from powdered sugar ashes.

I’ve been working on refining a recipe for a hummingbird cake in bread form. The first loaf I made came out a little too dense and dry for my tastes so after some modifications the second loaf went into the oven. When it finished and cooled, I sliced off the end piece and knew I was on the right track because this time the bread was fluffy, moist, and delicious. Excitedly I started slicing off more pieces to plate for photographing, but as I made my way to the center I learned that the loaf was undercooked. The middle was far too wet as the bread really needed at least another 15-20 minutes in the oven. While I could have transferred it back to the oven to try and bake it through some more, I really wanted to be able to write up an exact cooking time when posting it to my blog. The only option for getting it right was to start the recipe from scratch again and to try and perfect the cooking time. Third time’s a charm, right? We will see when I make it again in a couple of days!

Now I am left with this poor, flawed loaf that never got to mature into its hummingbird adulthood. Don’t worry little guy, I won’t give up on you! I will wave my magic spatula and turn you into the best darned french toast ever. 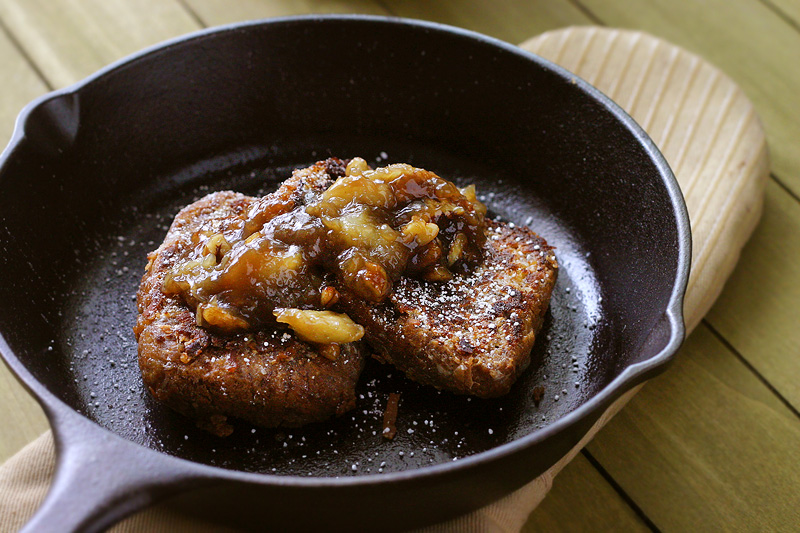 I knew that my friend Chris (someone with more enthusiasm for eggs than is normal for any human being) would be over for breakfast. Considering I was going to be making French toast for him, a French toast without any eggs, I had my work cut out for me. Then of course there is Jah, who has never eaten French toast because he has never eaten eggs. I also wanted to make his first experience as enjoyable as possible. There would be judgement happening here, yo.

Seeing as the bread was already sweet and a little under-baked, I opted to do two things with the batter. The first was that I wanted to make it slightly savory with the addition of neufchâtel cheese (inspired by the use of cream cheese frosting on hummingbird cake). Second was that I wanted to brush on the batter rather than dipping the slices, so it wouldn’t be a soggy mess. Just enough to crisp up those edges. While this would have been delicious with a pat of butter and a drizzle of maple syrup I really wanted to play off the ingredients in the bread a little further. I whipped together a sweet caramel rum sauce with bananas, pecans, and cinnamon that was spooned over the top with a dusting of powdered sugar.

The verdict? Both of the guys loved it! As a matter of fact Chris said that I have ruined French toast for him forever because this version was way too delicious. If that’s not an indicator of the tastiness of the recipe then I don’t know what is. So if you find yourself stuck with a loaf of undercooked sweet bread, don’t lose heart. You can always turn that sucker around into something awesome. That said, you certainly don’t need a fail-loaf to make this tasty dish. Whatever bread you have lying around would work beautifully. 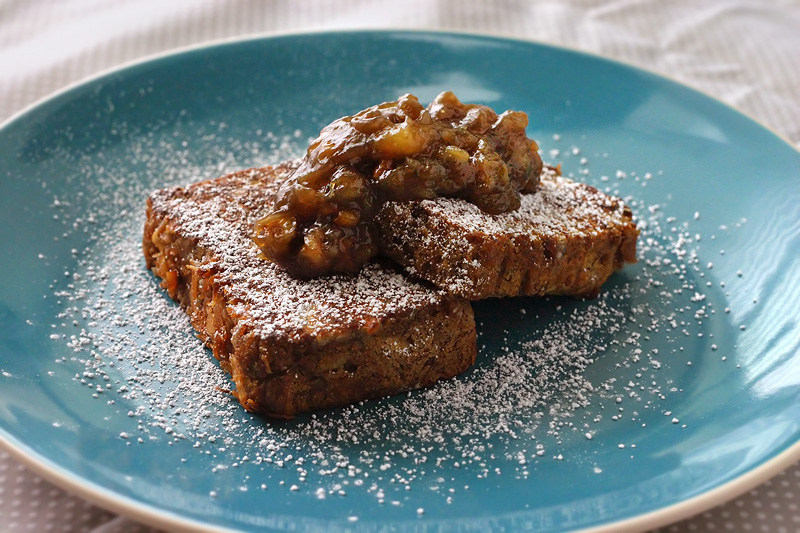 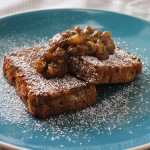 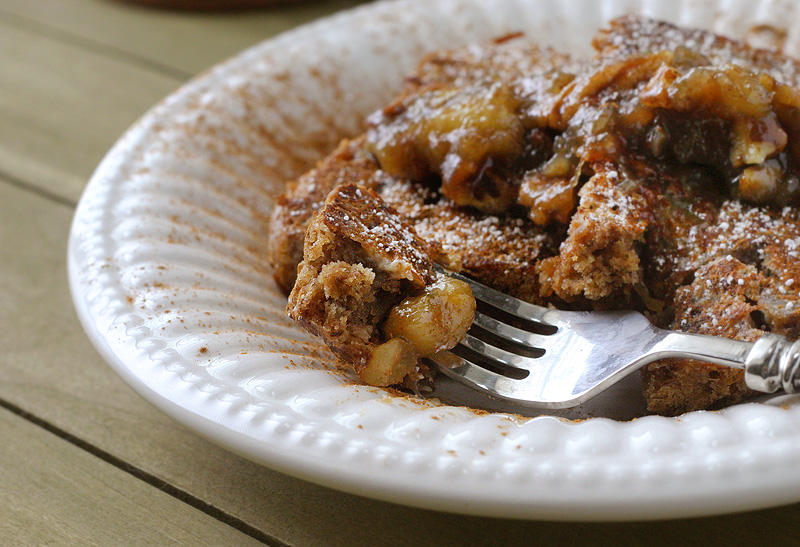