Living in Texas it can sometimes be a little difficult to look forward to the oncoming summer, what with its droughts and relentless heat waves. That anxiety is quickly diffused once I glimpse the new crop of garden fresh veggies at the grocery store. Here is a crisp, healthy pasta dish to embrace spring’s bounty and warmer months.

This is a wonderful dish to prepare if you’ve blacked out in a farmer’s market and awoken in your kitchen to find yourself staring hazily at mountains of fresh produce. The first time I prepared this I was craving pasta primavera, but wasn’t wanting something heavy. I cut calories by removing half of the pasta and replacing it with loads of vegetables. Serving the dish slightly warm rather than piping hot really allows the texture and flavors of the vegetables to shine.

Many people are susceptible to impulse purchasing – myself included. If I walk past a sassy pair of high heels I will make a mental note of their appeal and move on. If I’m in the electronics department and I see an immersion blender that I’ve been needing since mine broke, I will pass by and wait to do some review comparisons and price checking online. If a game on my Steam wishlist goes on sale then I… ok well I might buy that. The one thing I can’t resist though? Well, apparently it’s a bundle of beautiful, vibrant, purple  baby carrots (and all of the additional veggies to accompany them into the oven). 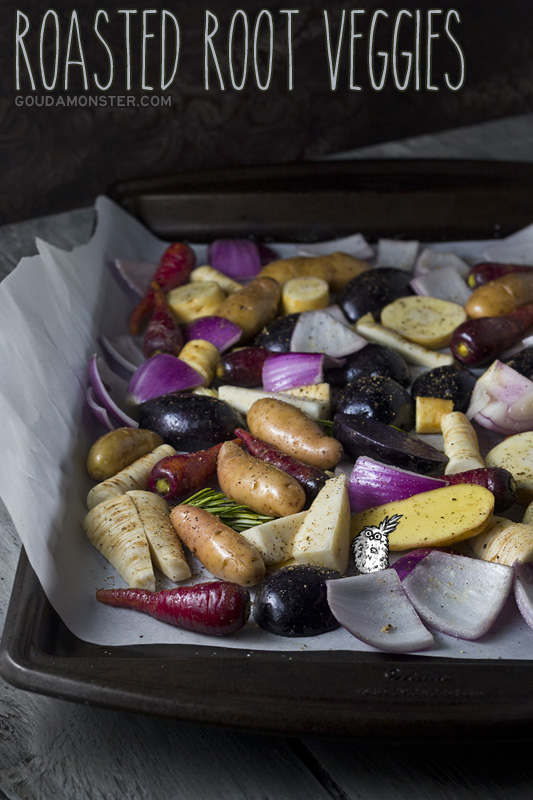 I just don’t know if there is a better way to prepare vegetables than roasting them. The caramelization of those natural sugars and the ease of preparation? It’s hard not to love it. For this meal I used baby purple carrots, parsnips, yellow and purple baby potatoes, parsley root, garlic, onion, and fresh rosemary. You can use whatever root veggies you can get your hands on, whether it’s layer of simple russet potatoes or a spectrum of multicolored carrots arranged in a heart on your roasting pan. I can’t resist going the colorful route myself. I swear that pretty food tastes better. 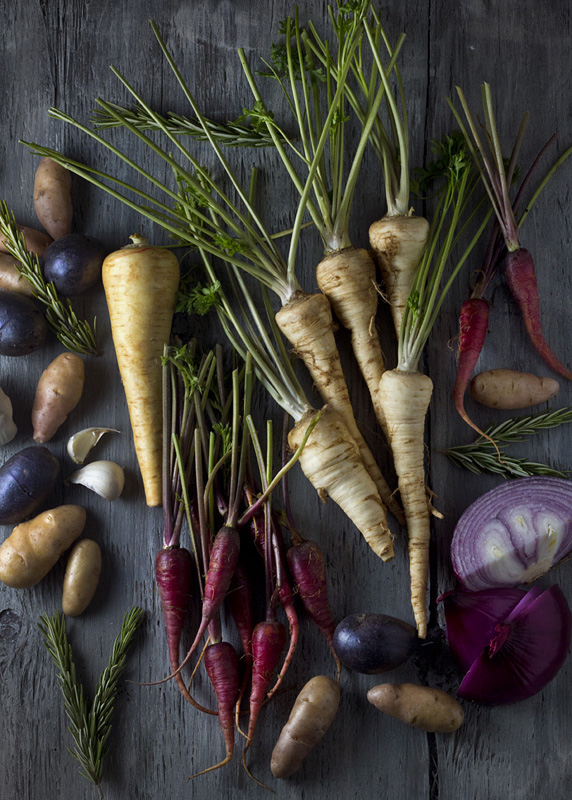 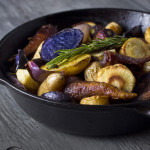 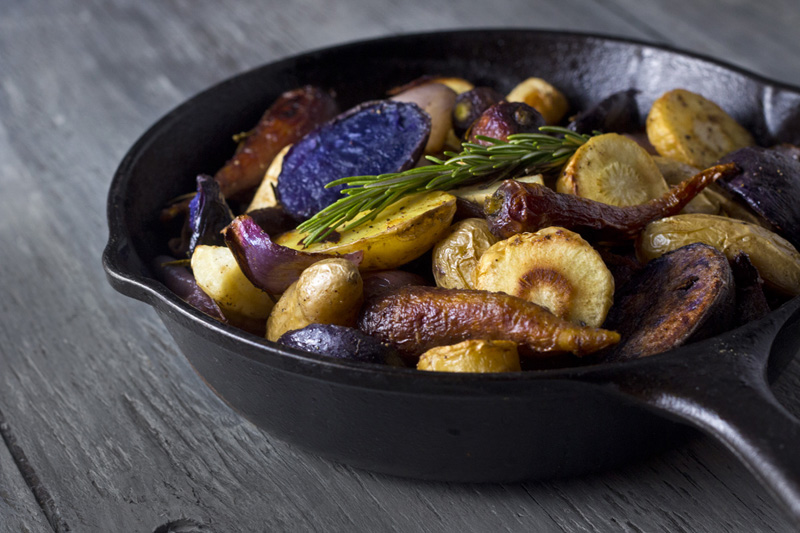 Few dishes are more comforting than a piping hot bowl of soup during the chilly months. I love making soups and stews; not only are they almost completely foolproof, they are also easily customizable. Whatever leftover veggies are in the fridge can be tossed into a pot and transformed into a hearty meal – it’s awesome. 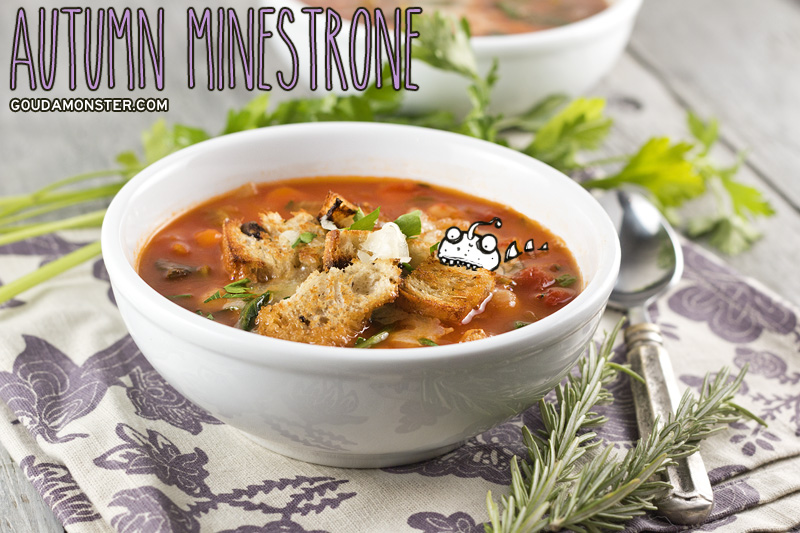 For this minestrone I used Pomi brand boxed tomatoes because I love the flavor as well as the fact that they are not cooked with salt. One box of Pomi tomatoes is about the same as two 14oz cans, and you can substitute accordingly. Keep in mind that you may want to tweak the salt in the recipe if your canned tomatoes contain sodium. Also feel free to use more pasta. I choose to go fairly light to focus on the vegetables and keep the calorie count low. 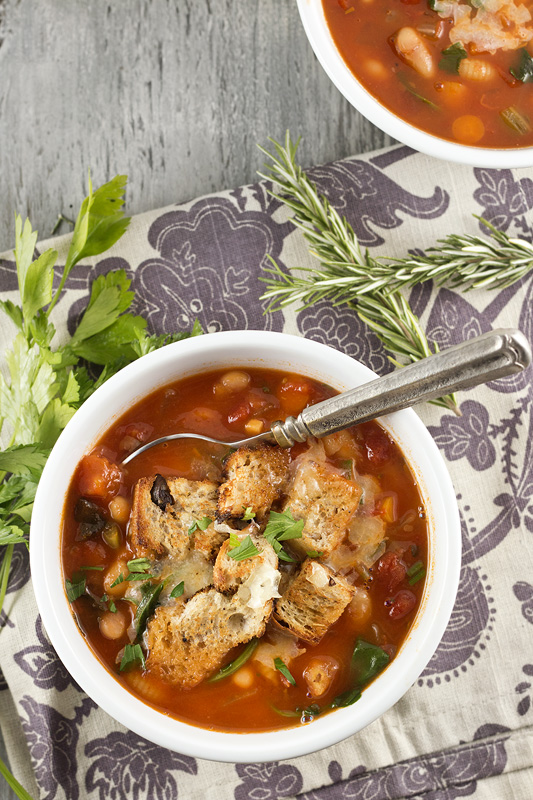 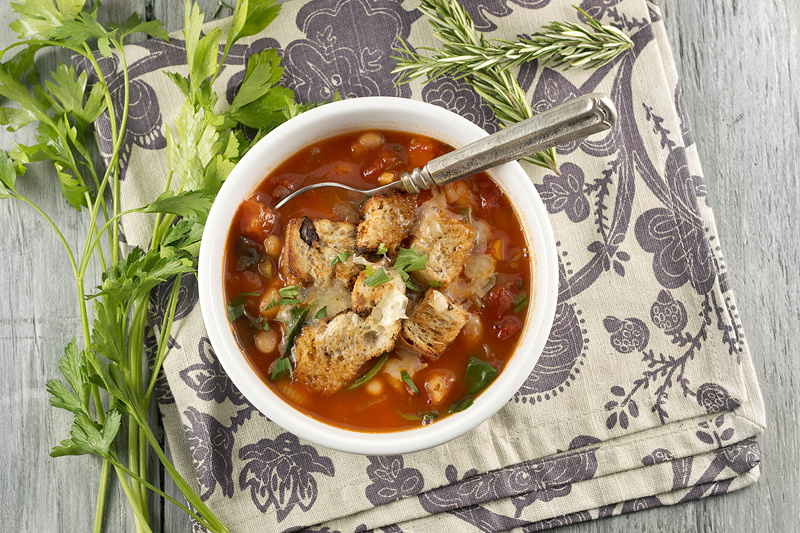 The classic pairing of grilled cheese and tomato soup is one of my all time favorites. It’s something that I – and most other people I know  – grew up eating, so as adults it has evolved into no-fuss comfort food. Nostalgia aside, it’s incredibly easy to make a more grown-up version of this dish that will make you want to throw away your can opener and forget the name Campbell’s (except don’t toss the can opener because you need it for the tomatoes). I grow basil on my balcony because I love it so much and it’s almost always the flavor used in tomato soup, but if you’ve never made your tomato soup with rosemary you’re in for a real treat. It’s particularly wonderful when fall starts to roll around because rosemary has a savory, evergreen-like aroma that reminds me of the upcoming holidays. The soup itself is very low calorie (less than 80 per bowl) but I still wanted to find a way to trim down the calories on the grilled cheese front. In the end I decided to make open-faced grilled cheese “fries” so that each person only got one slice of bread instead of two. Not only is it a little bit healthier, but they are the perfect finger food for dunking into a piping hot bowl of soup. But yeah… I still ate two slices of bread because the fries were too delicious. Oh well… I tried! 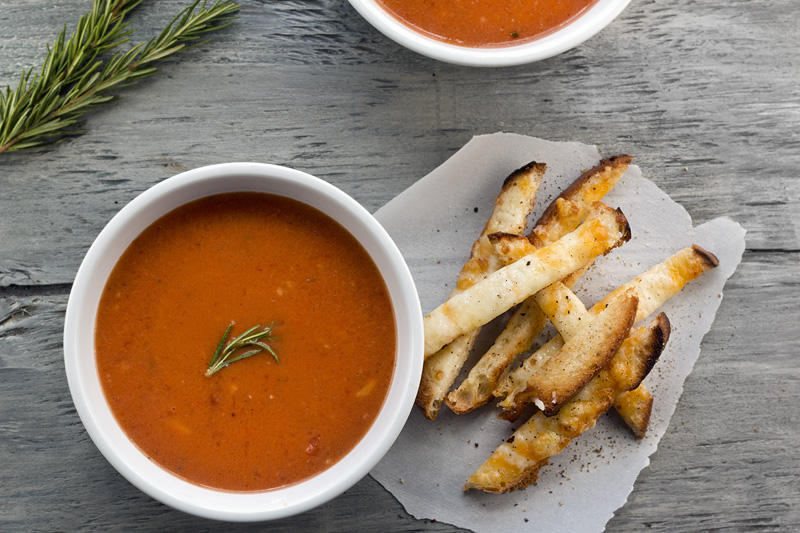 While making this for lunch today I didn’t remember until the very end that my immersion blender was broken. I ended up transferring the soup to the food processor to puree it which made me realize how much I LOVE my immersion blender. If you don’t have one of these and you find yourself making a lot of stove-top soups and sauces I highly recommend getting one. It makes your life so much easier! Doing it in the food processor or in the blender works fine though, just make sure that you’re careful as the hot liquid can splash around and make a mess – especially if you overfill the basin.

For the grilled cheese sticks I think using a combination of cheeses is the best way to go, but use whatever you have around. For mine I used a mix of sharp white cheddar, a colby-swiss blend, and mozzarella. The sharp cheddar gives it a nice pungent flavor while the other cheeses give an ooey gooey melty consistency. I used a total of 5 ounces so it would be a little under a serving of cheese per person – another area where I was trying to skim off a few calories. The bread I used was a white Italian bread with a subtle open crumb. The shallow holes end up creating yummy cheesy pockets of awesomeness, and in some cases the cheese oozed through and browned a little on the bottom when grilling – perfect. 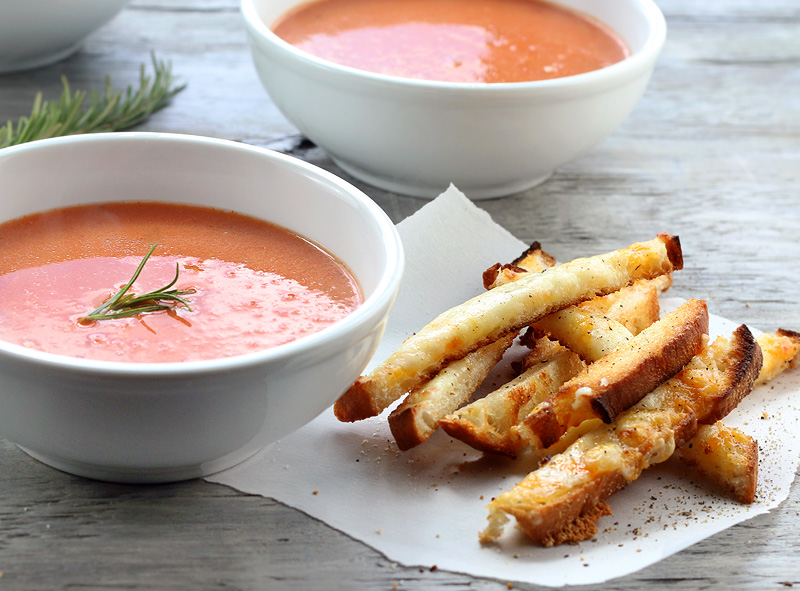 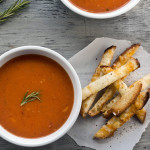 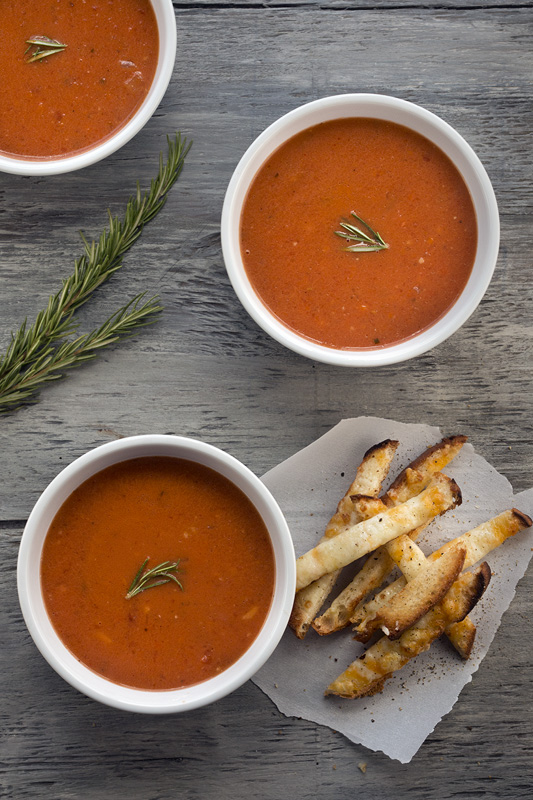 I feel like I’m a bit overdue for a “healthy” post, especially since I consider healthy eating to be an important part of my life. Don’t get me wrong… I still love a raunchy slice of floppy, foldable cheese pizza or a piece of decadent chocolate mousse cake, but I try to consume those things in moderation by limiting them to the weekends. On weeknights I put more effort into restricting my calories and minding my intake of fat, carbs, protein, fiber, etc. I suppose one thing that is funny about this post is that this slaw was made as part of a labor day meal which consisted of spicy vegetarian sausages stuffed into hoagie rolls with tomato sauce and melted cheese and a side of cheddar dill mashed potatoes. Aaaand I didn’t even eat the slaw. Is it ok for me to admit that? I actually don’t like cole slaw at all, but that doesn’t stop me from making it for the people that do. I relied on my boyfriend and best friend to tell me whether or not this was a worthy Gouda Monster recipe and they both agreed it was a winner. Jah even whipped up another batch for himself one night and enjoyed it just as much the second time. 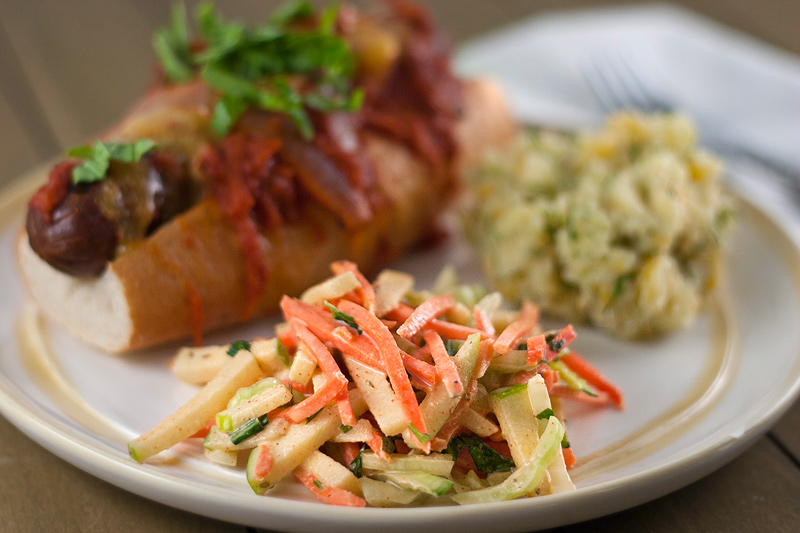 I used Veganaise when preparing this but you could certainly use any mayo that you prefer. Opting for a light mayonnaise will drop the calories to around 80 per serving. Of course you can always adjust the amount of heat by cutting back on the hot sauce. The creaminess of the mayo along with the sweetness of the carrots and apples cuts through some of the harshness of the spice, but people have vastly different tolerance levels for that sort of thing. If you’re concerned about it I would recommend adding the hot sauce little by little as it is always easy to add more, but once it’s in there you can’t take it out. Another substitution that would probably work fine is the use of cabbage in place of the baby bok choy. I opted for bok choy mostly because of its small size. We don’t use a lot of cabbage around here and I knew there would be a lot leftover that goes to waste. With the baby bok choy I was able to cut up almost the entire thing for the slaw and not worry about having anything leftover to wilt away in the fridge. Whatever you decide to do you’ll only be out about 10 minutes of your time for this super easy side. 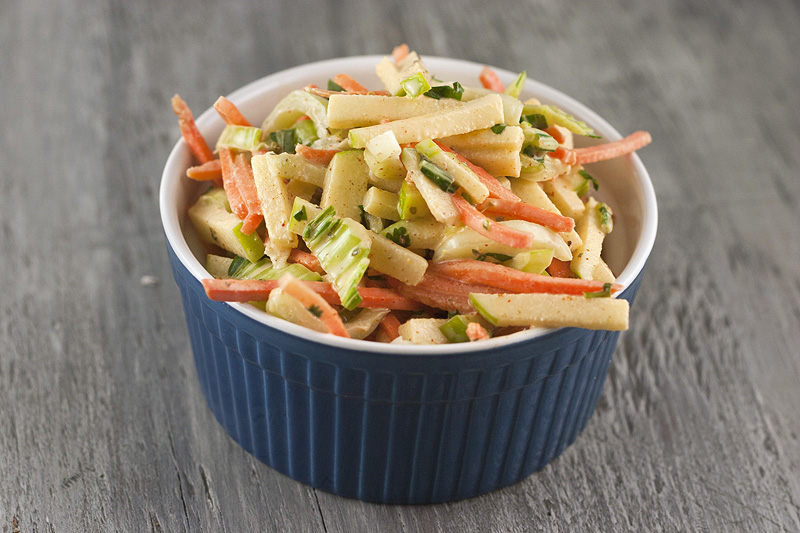 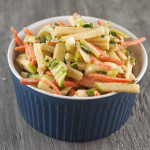 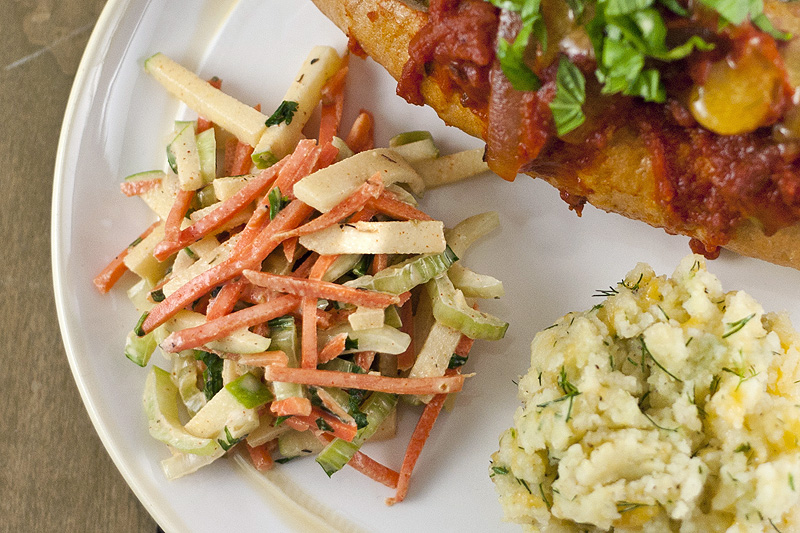 Even though I’m not a vegan myself, I have a handful of friends who are. It’s pretty tempting for me to want to put cheese in just about every entree I make (and let’s face it – I did eat this with rosemary cheese toast), but I make quite a few dishes that would be vegan without my usual cheese garnish or spoonful of cream at the end. As it stands I rarely keep regular milk in the fridge so most of my recipes use unsweetened almond milk. The same goes for eggs – aside from the Baked NYC Brownies I made, pretty much every dessert you’ll find on this blog is egg-free. When I met Jah he didn’t eat anything with eggs in it so I got into the habit of cooking that way. Even though his dietary restrictions have changed over time, those habits have stuck. And hey – that means I get to eat globs of raw cookie dough without worrying about salmonella. That’s a huge win for me!

Last night I knew I wanted to whip together something delicious and vegan, and I started toying around with the idea of recreating a traditional comfort food meal that some people might get a little homesick for after giving up meat for years. I remembered I used to love eating pot roast that had been stewing away in the slow cooker all day with onions, potatoes, and carrots. In particular that rich thick stock was like liquid gold to me. The more I thought about it the more I knew I wanted to give that style of recipe a tasty vegan makeover, but with a unique twist to make it more my own. Originally I thought I would use a red wine in the base (which I still think would be excellent if you want to sub it in) but eventually settled on using Guinness. At the time, seeing as I’m not a beer drinker, I had no idea that Guinness wasn’t vegan… or even vegetarian. With the help of barnivore.com I tracked down Dark Truth Stout, which uses seaweed instead of fish in their processing so it’s totally vegan. 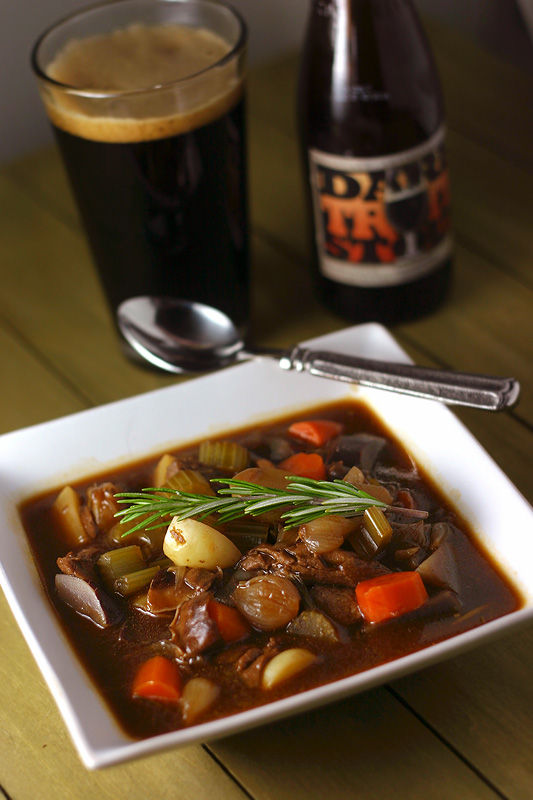 I had a package of vegan friendly beef strips from Trader Joe’s in the fridge that I had been eager to try. They provide a bit of added protein and texture to the stew but they don’t pack a lot of flavor on their own. For this reason I think that you could probably leave it out and still have a great meal on your hands. I know that in some areas meat alternatives are difficult to come by. The caramelized garlic and onions simmered down with chunks of root vegetables and fresh rosemary is hard to beat. In the end I felt like this stew was a huge success. It captured the comforting feeling I was going for while having that little something extra from the stout. So here is the first major shout-out to my vegan peeps! Enjoy! 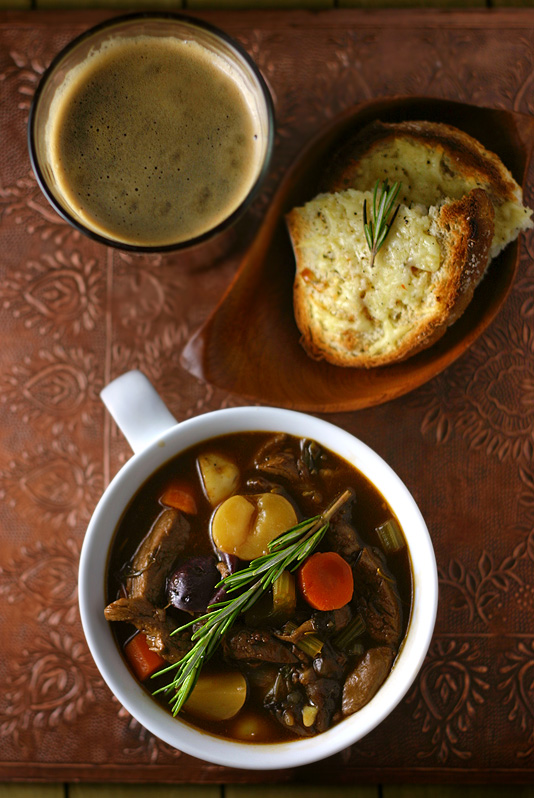 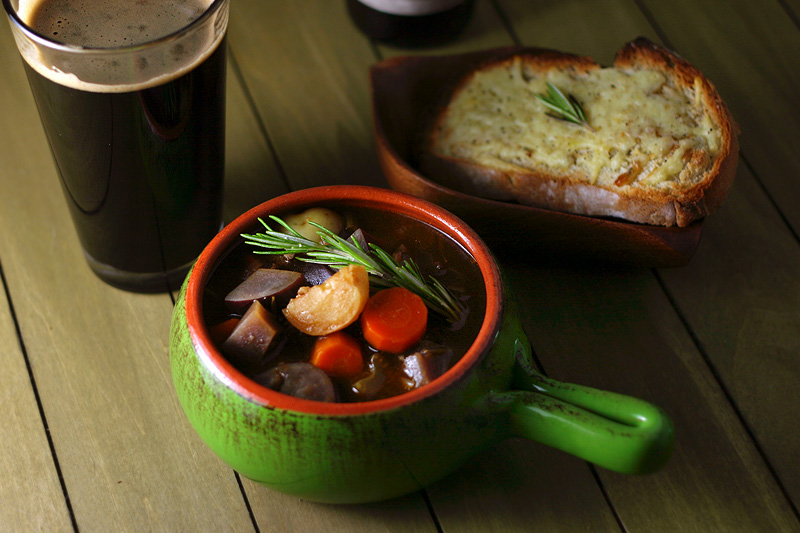